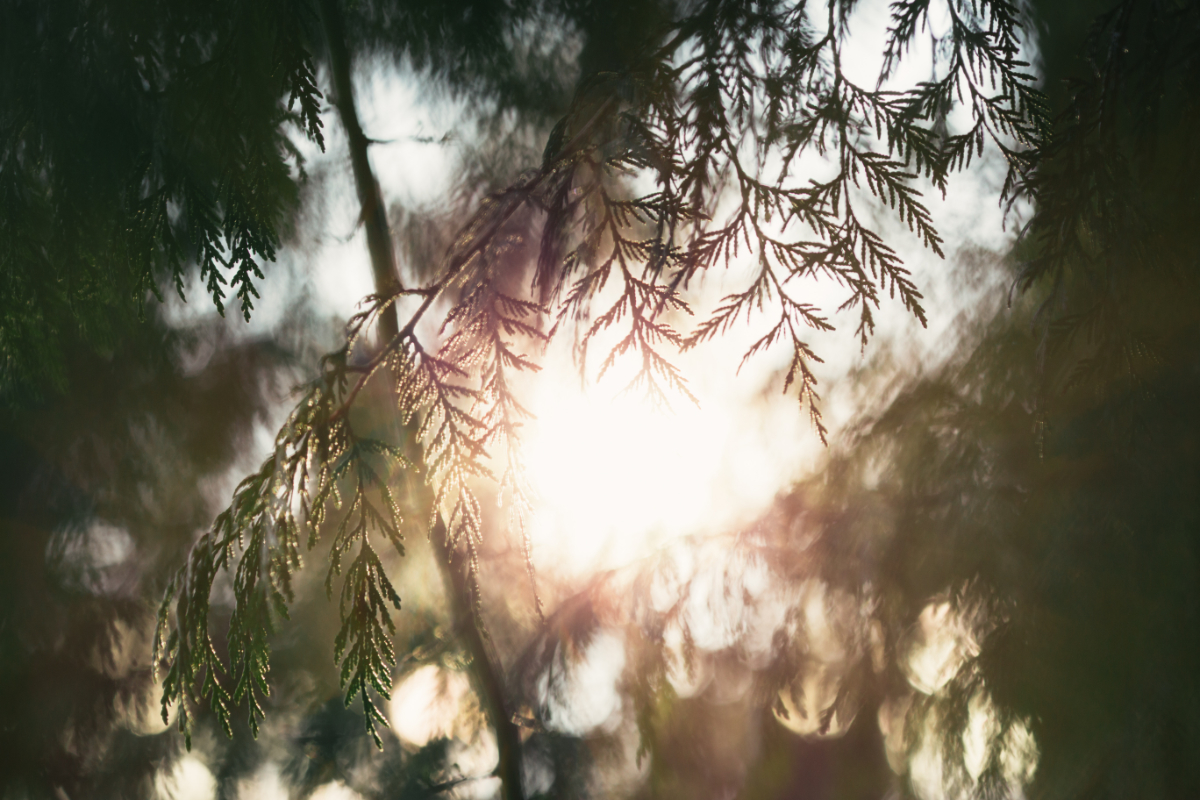 When we release our worry and control to the Lord and cling to His promises, we can experience genuine freedom in our lives.

A few mornings ago, I awoke at dawn to the familiar sound of birds chirping outside my bedroom window. A refreshing stretch of beautiful spring weather has called for sleeping with the windows open. And each morning, I’m treated to a choir of birdsongs. There are the high pitched, staccato offerings of the finch. The cardinal’s piercing siren-like call. Soft, plaintive cooing from the mourning dove. The warbler’s high lonesome vibrato. And all this is punctuated by loud, boisterous squawking solos from the blue jays, blackbirds, and hawks! 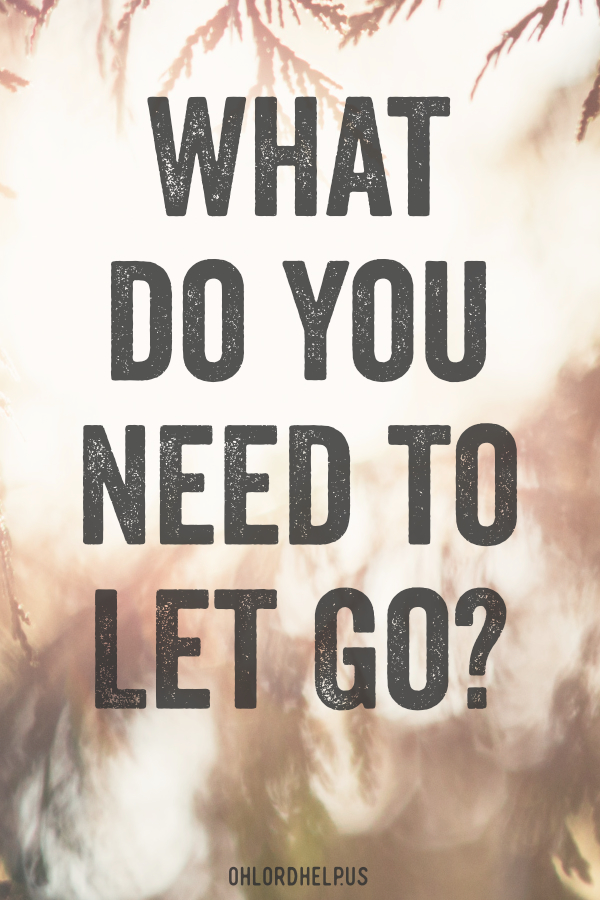 Over the nearly four years we’ve lived in this home, I’ve grown accustomed to this morning avian greeting. You see, although our neighborhood sits in the heart of town, we’ve been blessed to live right beside nearly 15 acres of undeveloped woods. Our family has taken daily walks with our dog in those woods. The woods have provided a natural buffer against impinging traffic noise and light pollution. And the woods have enveloped our property, creating a peaceful oasis for gathering around the fire pit with family and friends.

But within the past year, a real estate developer–that builds high-end apartment complexes–purchased the land. And soon, this wooded sanctuary will be leveled to the ground. Given all the development in this area, my husband and I used to joke that the name of our town, Wake Forest, should be changed to Wake “Used to Be” Forest. But now that the woods right next to us are on the chopping block, this moniker is no laughing matter!

So, what has been a quiet, sleepy dead-end road in front of our house will soon become a thoroughfare. The place where our kids and their friends from the neighborhood have learned to ride their bikes and play will no longer be safe for children. And to add insult to injury, a row of large garbage receptacles for the entire apartment complex will sit a mere 20 yards from our bedroom window! So goodbye to my morning chorus of birds, and hello to the daily dumping of stinky trash and clanking recyclables!

A while back, the developers held a public hearing where they presented their site plan to the city planning department. They explained how they will maximize the property’s potential by removing all the trees, grading the land, and constructing apartment buildings with sprawling parking lots on every side. It’s like I’m seeing firsthand what Joni Mitchell’s Big Yellow Taxi lyrics lamented: “Don’t it always seem to go that you don’t know what you’ve got ’til it’s gone? They paved paradise and put up a parking lot! Ooo bop bop bop bop!”

My initial reaction was to “bop” those developers over the head, mount a neighborhood insurrection, and send them packing! But, I’ve come to the realization that this is not the battle I need to fight. In fact, the whole situation has caused me to examine my own internal battle–of learning how to release those things over which I have no control.

Needless to say, I’ve had some difficulty wrapping my head and heart around this impending change. Because I’m having trouble letting go. Letting go of the wonderful memories that we’ve formed in this house. Of this peaceful place that we’ve been blessed to call home. Releasing fear and worry about what the future will hold for our family’s living situation.

But isn’t our walk of faith so often about letting go? In this case, I need to release something that’s ultimately pretty minor in the grand scheme of things. But in the past, I’ve tried to cling to things that the Lord, in His grace and mercy, was trying to take out of my hands. Things like childhood traumas, unhealthy relationships, a career that was not life-giving, a drug addiction, and a home that was too small and breaking down around me.

Although all of those things were destructive, I was holding tightly to them because they felt so familiar to me. In many ways, I had solidified my whole identity with them. So the thought of allowing the Lord to remove them from my life felt extremely unsettling and downright frightening. But the thing was, none of them was serving me. And some of them were actually pulling me further away from the Lord.

So, in His grace and mercy, He allowed my life to crumble to the point where I eventually cried out to Him for help. I finally let go. And when I relinquished control over my life, I experienced the freedom that comes when we cast our cares on Him.

Cast thy burden upon the LORD, and he shall sustain thee: he shall never suffer the righteous to be moved.

And this is a continual process, isn’t it? So often, when the Lord has helped us through one challenge, there’s another difficult situation awaiting on the horizon. But when we let go and allow God to carry us through, He proves Himself faithful. Beloved, if we’ll cling to Him, we’ll see that He is good, that we can trust Him, and that He is leading and guiding us perfectly. And no matter the trial, He will be with us, shepherding us through. Because our Abba is not in the business of harming His children, but of loving and helping us.

For I know the plans I have for you, says the Lord. Plans not to harm you but to give you a hope and a future.

When we allow God to carry us through, He proves Himself faithful. If we'll cling to Him, we'll see that He is good, we can trust Him, and He is leading us perfectly. Click To Tweet

So, in the case of the development going up right next to my home, I am letting go. No longer sulking over the loss of my family’s carefree lifestyle in this home, I’m thanking the Lord for the good times that we’ve shared here. I’m releasing my worry about where we’ll end up next and whether we’ll have a soft landing. And I’m holding fast to His promises to take care of me and my family. I’m clinging to Him who says He will never leave nor forsake me.

And the LORD, he is that doth go before thee; he will be with thee, he will not fail thee, neither forsake thee: fear not, neither be dismayed.

Are there things in your life that the Lord is inviting you to release? Are you clinging tightly to Him? 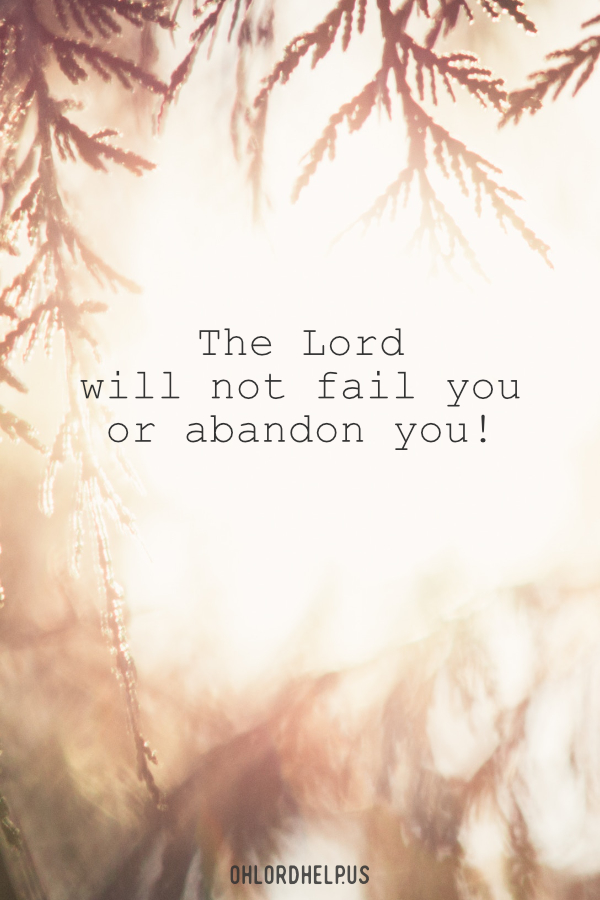 All scripture verses are from The King James Version of The Holy Bible. 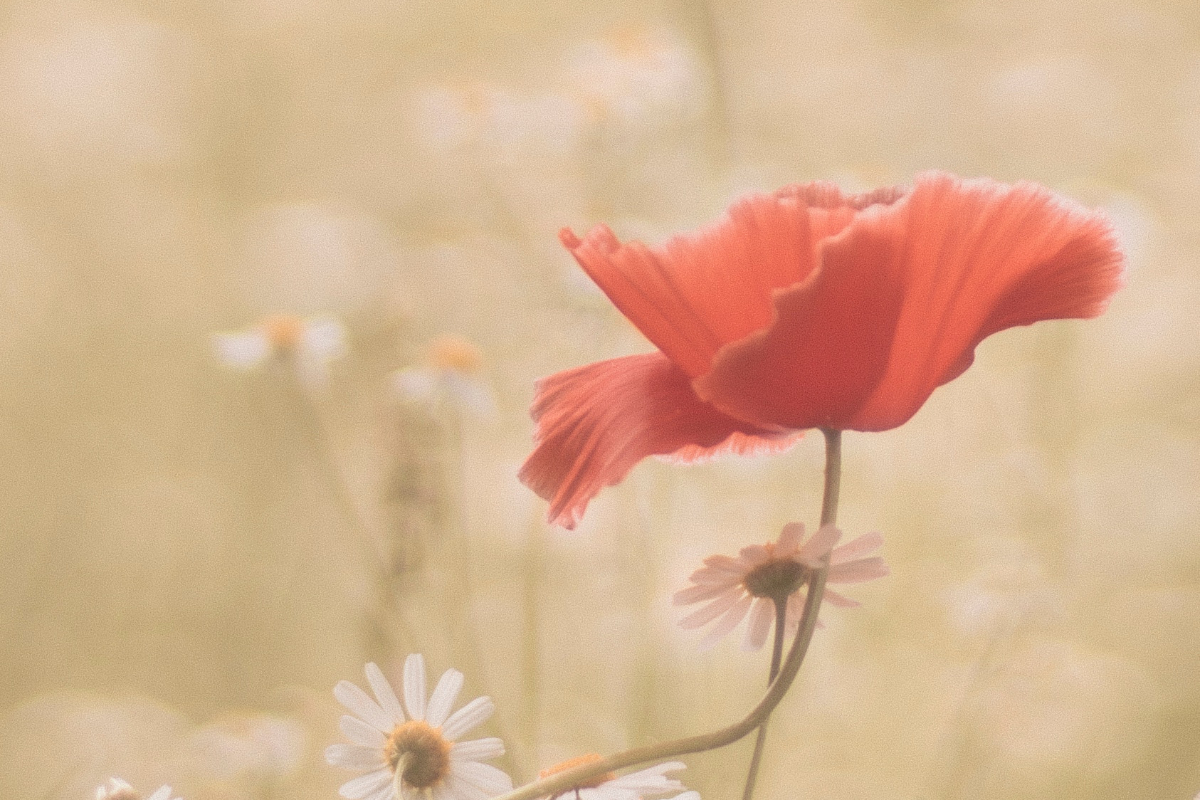 God is our supply. He desires to provide in all areas of our lives, but we often get in the way. We must learn to trust in God and His perfect way.

It was a miracle. The tiniest of miracles, but it opened my eyes to God. It gave me a new view of how real He is, and how much He cares for me; for us…

I talked, briefly, at the beginning of the year about my husband taking a complete 180 in career paths. I spoke about how calm I was about this change, considering my habitual responses. This was a step of faith, and a direction that God had called him toward. We knew it was going to be a bit uncomfortable. We would be going from a steady, constant pay check, to an inconsistent, ever changing one.

If you watched that video, you know we talked about supernatural peace.

My current status: freaking out. What the heck happened? Where did my peace go?

Oh, it went right down the toilet when things became real. The reality of paying the mortgage, conserving gasoline, buying groceries and school supplies when we haven’t had a steady pay check since April. A bit uncomfortable? That’s kind of an understatement.

We are immensely blessed. We have the opportunity every year to have a somewhat “free” vacation. Family property allows us this freedom. However, as I said before, Casey’s pay check is extremely inconsistent. So, even though we were able to spend time at the beach, anything extra wouldn’t happen: the couple times we go out to eat, the ice cream stops after a long day of play, the trinket shopping.

We decided we would save a little to have at least one night out. Hallelujah! Momma didn’t have to cook! As we sat down and started looking over the menu, my heart just sent a quiet request to the Lord.

“Lord, it would be so nice if our meal could be paid for.”

We had the most lovely meal! My little family, the sea air, the live music, the fresh seafood. I was so grateful for our day and our ability to spend this moment together. And just like that, our waitress said…

“Have a great night!”

“Someone already took care of your check for you.”

Oh sweet friend! God truly sees us and hears the desires of our hearts. He cares for us in ways we can’t even imagine. My quiet request wasn’t out of greed, or recognition. It was a cry of thanksgiving, a cry of gratitude and He honored me. He honored my family. God knew I needed to see that He is the only provision I need. He is the only one I can truly rely on.

Consider the ravens: They do not sow or reap, they have no storeroom or barn; yet God feeds them. And how much more valuable you are than birds! Who of you by worrying can add a single hour to your life? Since you cannot do this very little thing, why do you worry about the rest?

That day was perfect. The choice I made to not fret or fear of the days to come, will never be a regret. I did not fear how the mortgage would be paid, concern myself with the fact that Casey desperately needs a new car, or worry about the grocery having sales on items I need. I lived in trust and thankfulness that God supplied today, and has already taken care of tomorrow. He showed up in a tiny, powerful way because I trusted in Him! Unfortunately, when I put my trust in Casey to provide, to supply for all our needs and desires, I denied God and who He is. I denied Him the opportunity to become and to stay our provider. I am learning to daily lay down myself, my concerns for tomorrow and rely on the miracles and provisions of today.

There have been so many more instances of provision over the course of this season. My “freak out” is being redeemed and replaced with peace again! I can now say, I am so grateful, so thankful to my provider. Yahweh Yireh.

I just want to confirm that God is good! God listens. He’s there. Outcomes may differ from what we think, but that doesn’t change His faithfulness or His ability to supply. He’s El Roi, Yahweh Yireh, and Yahweh Shalom. He sees, provides, and gives His peace!

I am learning to daily lay down myself, my concerns for tomorrow and rely on the miracles and provisions of today. Click To Tweet